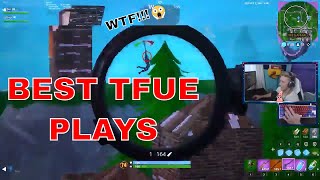 Tfue is known as one of the most popular streamers on Twitch and one of the best Fortnite players in the world if not the best. In this video below, you can see 10 times that Tfue proved he is not human:

This video shows 10 of Tfue’S best clips whilst he was live streaming on Twitch in front of his tens of thousands of viewers.

How did Tfue become so good at Fortnite?

Not only has he had thousands of hours playing the game but prior to the release of Fortnite, Tfue was already a professional gamer. He first started out in one of the first battle royale games created called H1Z1 where he played for the team Denial Esports. After, he moved to Player Unknown Battle Grounds in which he joined Rogue.

When Fortnite was released in July 2017, Tfue like many other professional gamers saw the potential in this new batlle royale. A year later, Tfue signed a contract with Faze Clan. Since then his followers have blown up reaching over 10 million YouTube subscribers and 6 million twitch followers. However, Tfue recently left Faze having reportedly taking them to court due to his unfair contract and is now going solo.