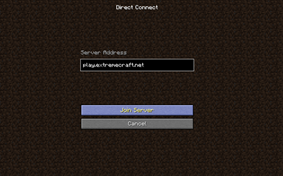 ExtremeCraft is an extremely popular minecraft server, which has hundreds-thousands of players playing at a time. ExtremeCraft are reaching almost 2000 votes per day and sometimes over. These votes are the players that vote for what they think is the best server. Players are allowed to vote once a day and receive rewards on the server for voting. Currently, ExtremeCraft are ranked 4th place in the top 10 minecraft servers. This is based on the amount of votes that they have received.

Want to play on the ExtremeCraft server? Copy this IP into the server address area on Minecraft multiplayer: Play.extremecraft.net

You can either enter this IP address by doing a direct connect or by adding the server to your multiplayer server list. By adding this server to your list means that it is saved. This allows you to join the server at any time and to not have to keep typing the address constantly every time you load minecraft.

Some other minecraft servers that are also popular are:

There are many different mini games for you to play and are currently working on adding more game modes and also improving their current ones. Some of the game modes that you can play are:

Some of the game modes that ExtremeCraft are hoping to release soon are: