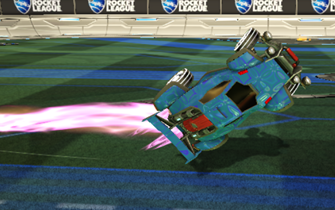 Ever wanted to know how to master the half flip?

A half flip is an advanced skill used by all of the pro’s. It allows you to turn your car 180 degrees very quickly to face your car in the opposite direction. For example, if the ball is behind you, then you can use a half flip to turn quickly and hit the ball with the front of your car.

The half flip is an advanced skill, but no matter how good you are at Rocket League the half flip requires quite a lot of practice. Personally, I have noticed that people start to tend using the half flip at around rising/shooting star level. If you are unsure or have no idea how to do a half flip in rocket league or how a half flip works, then watch this video, which explains everything.

Also, doing a half flip can be easier and harder with certain Rocket League cars. For example, the batmobile is a good car to be able to do the half flip easily.